If you ever read The Pragmatic Programmer, you'll be familiar with the concept of Code Generation. It has a section dedicated to it.

In order to avoid writing a bunch of front end code over and over, just to reflect the models and endpoints the back end provides, you can generate it all automatically.

This tutorial will be divided in two sections, the back end section and the front end section.

This tutorial will use C# ASP.Net Core for the back end framework, and Angular for the front end.

When you generate a new web application project with Rider it actually already includes Swagger for you in the project, using SwashBuckle. But it doesn't generate any files that you can use outside the server's code.

The aim is to generate a swagger.json file, which we will use later for the front end code. AND, we want to generate it automatically, without having to run extra commands.

To achieve this we will generate the swagger.json file at build time.

I'll be targeting framework net6.0, lang version 10. Reason for this is that it's the solution I found to assembly version mismatches.

The commands you need to run are:

What this will achieve is make the SwashBuckle CLI tools from the context of the solution.

You will want to make a directory for your Swagger-generated files.

Next, open up your .csproj file and make sure the following lines are present:

What this will achieve is that after your solution builds it will generate a couple Swagger files, swagger.json and swagger.yaml. In reality you only need the JSON version for the purposes of this tutorial.

While you're at it, make sure your Swashbuckle.AspNetCore version is 6.3.0.

And that should be it. If it's working, when you build your project you should find out that you have a swagger.json and swagger.yaml in your swagger/v1/ folder.

And now for the tooling side of things:

And to your npm scripts, you need to add:

Now you can automatically generate front end code, and stop writing the same code over and over. 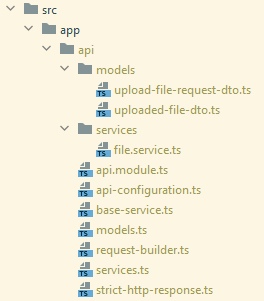 Make sure to follow the instructions on ng-openapi-gen to setup Angular properly to use the generated code for the various cases it supports.

My .gitignore includes these lines for the back end:

The build process fails if the folders don't exist though. So I suggest you also run the following commands, in order to make sure the folder isn't lost:

And for the front end:

With the above the back end's code is used as the source for the swagger.json file, and the front end automatically generates code you can use to access those endpoints, and with TypeScript types to go along with it, so you're all typed up.