**Notice from 2015: In retrospect, this seems kind of obvious, doesn't it? Feel free to skip this blog post cause it doesn't help you in life. lol

Also in this time of my life I had a tick of saying "so", so get ready for that. lol**

So. A lot of programmers talk about "the zone", this high performance mode that programmers get into is one that the most pro of the athletes also seem to experience. It is described as a "zone" where the people that experience it are just so concentrated that nothing distracts them and they can get great work done very quickly.

Most scientists can't explain this and the best explanation I have seen of this (IIRC) is that it's a result of "time slowing down", where your senses just get so sharp you can feel time slowing down, or so it is described.

You may notice I am mixing two kinds of "zones" here, the programmer's zone and the athlete's zone, this is on purpose, you'll see later on why.

So, I got thinking about this originally because of Rich Hickey's Hammock Driven Development. I got thinking about his idea. There is an excellent summary by the website [Data Sorcery With Clojure]() which can be found here: http://data-sorcery.org/2010/12/29/hammock-driven-dev/ 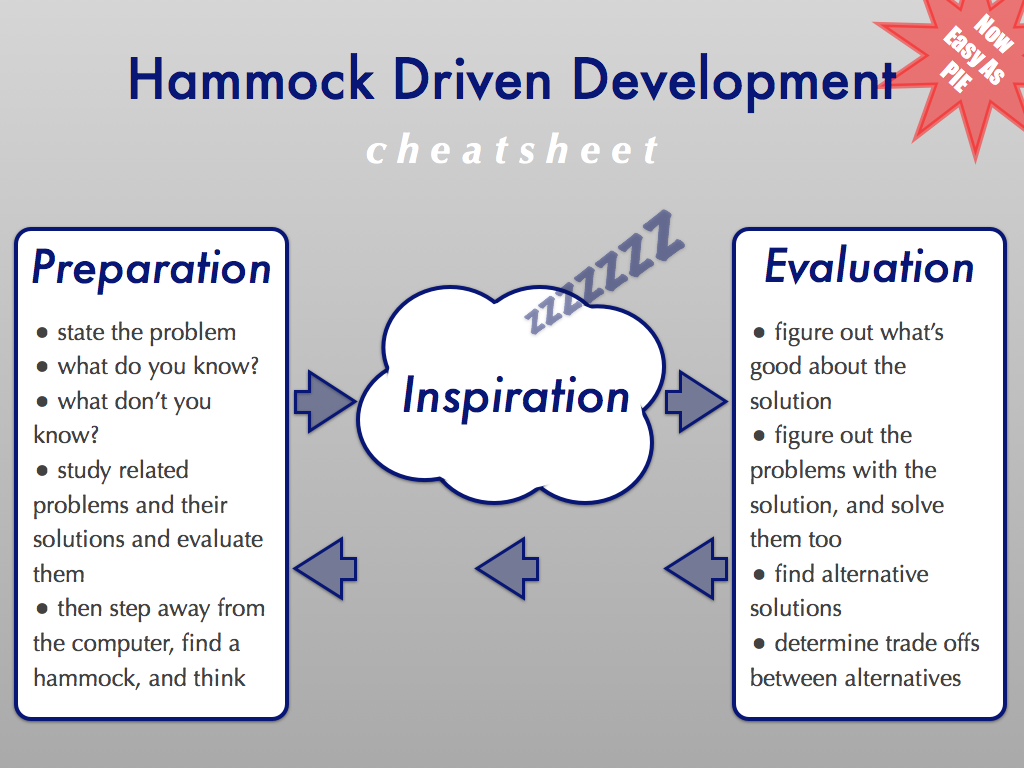 Now. I disagree with him partially. I do not think it works that way, but that's certainly seems to be the result. So it works, but not for the right reasons, you could say.

My theory of Hammock Driven Development

So how Rich explains it is that there's basically two minds. Evaluation and Preparation. Probably don't go by these names in Rich's world, but you get the idea.

Now here's where I disagree. There's only one mind in my book, it just has different priorities, now let me explain that cause it's not that simple.

For now assume attention units are just some kind of unit of concentration or something, I'll explain it soon enough.

OK, so, here's my idea of how the mind actually works, in terms of the zone. One mind, different priorities.

So let's say I'm just standing still. My mind at this point is doing all kinds of shit. Keeping track of bodily functions, breathing, blood pumping, all of the organs that process food and stuff, recording perceptions and evaluating them, keeping balance of the body. All of this shit is happening real time, often so quickly and so easily we don't pay much attention to it, but it's still happening. It is still doing all of that stuff.

Now, consider when you are sleeping or just relaxing. A lot of these senses are dulled or just completely shut down. When I'm sleeping all that's happening is breathing, blood pumping, and some bodily functions, but in general my body is quiet. My senses are practically hibernating (in computer terms), just awaiting the call that is "I've slept enough" or some kind of waking up call, of any kind.

Now, consider the mind's availability in both of these situations. In the first it's busy, in the second it's got free time. People often consider dreams as just your mind processing and organizing the stuff that happened during the day, that might very well be it entertaining itself, but that's another topic.

Some people have more of these attention units at their disposal, because of their environment, their natural "talent" (not my favorite word to be honest) etc.

Now, according to Rich, all the problems we've solved have been solved by the Evaluation mind at some point, and while we consider ourselves smart because we think of solutions fast it's just because at some point this problem had already been solved by the Evaluation mind and you just need to call it back to your Preparation mind. Rich is actually quite vague IIRC on this, but that's the general idea AFAIK.

People that are good at maths (without being some sort of parrot) just have attention units at their disposal... and practice. They have these attention units in order to have "variables" in their mind of number values that they need to keep floating around. Plus good mind processor.

Of course, this depends greatly on the person. His emotional and mental status and aptitude.